Light avant-jazz bass of the Slow Club in a Lumberton basement sets up a sultry, smoky scene.
By the light of a silver Tuxedo moon, a silhouetted figure plays a delicate piano, accompanied by a melancholy violin. Intensity and longing. A ghost drifts across the last few bars, betrayed by the fragile, shifted curtains and a hint of scent.

In another room on the same corridor, gentle mysterious electronica leaks out under the door…

Listening outside, a cello can be detected and a choir of unearthly voices.
The pace is quickening, and the camera pans away to the street below. A residual saxophone cries, but there is no-one to hear.

And now it’s dark. The jazz is still there, lingering. Persistent, smooth and just so fucking suave.
Haunted, becoming discordant. Fragments that still fit together.
At least for now.

In an empty apartment, with a faded carpet and buddleia growing in one corner, there is a mirror. Tarnished at the edge nearest the door. Looking directly into it reveals nothing at first, but glancing back
It becomes just possible to trace her name
On the glass. “Dorothy”.

A sudden overwhelming silence for just a shade too long.
And there’s that consummate piano again. But where is it coming from?
We try to listen, but it is distant and broken, interrupted by the passing sounds of life in this Lincoln Street block some years ago:
a footstep; someone breathing.
This thread of cotton caught on the corner of the table would imply the Quiet Man?
A whispered voice in sleep.
Upstairs, the tenant no-one sees
drags heavy furniture across the floor and turns on a tap.
He is listening to the radio. We spend hours here, watching.
Disturbed, confused and utterly engaged.

A tapestry of sonic fiction is revealed in the dust on the walls.
A buzzing insect, straight from the Darwin Room.
The Artist catches his breathe, as if to speak,
but the Tape Operator pressed fast forward before he could begin, and immediately everything was lighter.
European somehow, with Scandinavian textures.

“Frank, I think he said his name was. It certainly was the sort of name that should have at least one K in it…”

By now the beautiful ghost has manifest outdoors, chanting, drawing us after her as she moves through the city.
It is vaguely German, I think. Dusseldorf, 1971?
Urgent and urging. Insistent.  Traces of psychedleia and hallucinogens?
A window has been left open, and fresh air breathes a playfulness without.
Everything is easier, more relaxed.
But it is unclear what transpired to make it so?
People are smiliing, chatting.
Sitting at tables or leaning on bars, passing time and doing deals. The daring sound of smiling.

At least until the robins come.
Which suggests a kind of dawn, and the fullness of a kind of sudden circle.
Have we been here before?
Half-recognised phrases dance like motes in the shafts of sunlight
cutting through the dusty haze.
Individual notes break out of the chord sequences, arpeggiated and free, like the song of familiar birds.
Repeated, echoing. Recalling memories I wonder if we would rather
Not have?

But they are beautiful, each one a silk dress, folded neatly on a bed beside an ivory hatbox and a pair of worn gloves.

“Don’t you feel she may have only just left the room…?”

My Autumn Lover is here

She gladdens my heart
I find strength in her arms
Resplendent at this time of year
Embracing, uplifting
She brings hope to me
My Autumn Lover
My Autumn Lover

My Autumn Lover is here

My Autumn Lover of old

My Autumn Lover in gold

If anything, this second track on London Overgrown is a closer relative to ‘Oceanic’ than the album’s opening sequence. The violin string phrases, recurrent and echoing. Haunting the Highgate Cemetery, a fugue of string patterns repeating as Bach and Beethoven re-imagined (as The Electricity Club so eloquently suggest) and re-purposed for the 23rd Century.

John Foxx Beautiful Ghost is female, and we see her drifting through walls of apartments in a torn dress of faded grey. Dancing lonely to a gramophone she came across in an empty drawing room. Mournfully swaying and revolving in the longing arms of an imaginary lover. A tall man in a simple dark suit. We do not see his face. A breeze disturbs the room. Curtains blowing, and in a moment she has disappeared. Crumbled, dissolving – dust on his sleeve.

He crosses to the window, but sees only the ash of smoke fairies descending among the leaves. A street lamp, festooned with ivy and cobwebs dimly lights the place where he once walked, a Georgian grove in Hampstead. A smile drifts across his face at the memory but she is Already Gone…

In the first instance, John Foxx ‘London Overgrown’ album starts with what appears to be a long version of the opening track from the final instalment of the Cathedral Oceans trilogy released in 2005. Running at just over ten minutes (making it the longest piece in John Foxx entire recorded catalogue) “Oceanic II” may echo the track released ten years earlier and develop some of the structures thereon but it is a gentler more serene piece altogether. 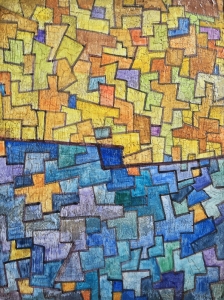 Set on a calmer tide, its leading string parts come from a lower register more akin to a five-string double bass or cello than a violin. The tide is slower, rolling on the deeper waters of warm, rolling bass notes.

We sit as if in a penthouse apartment looking out across The Woods That Hyde Park Has Become surveying the treetop textures of the overgrown city that is revealed in shades of fading green wherever we look. In the ten years since we last stood here the leaves have thickened, the trees mature now. Some have become old, their leaves taking on the yellow and orange hues of twilight and autumn. The music has become more resonant and sombre, itself ageing and growing more still. 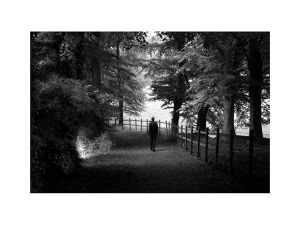 “Oceanic II” is a splendid cinematic introduction to the short films that follow, an overview of the next chapters in the ongoing of story of the Quiet Man adrift in a half-remembered city, visiting invisible place that may be found across any street. Its panoramic composition allows our view to drift over the Palace of Westminster, windows broken, tiled rooftops scarcely visibie now under bramble and creeper, to St Paul’s Cathedral where Wren’s niches, columns and buttresses lie half-hidden under bindweed and pigeon droppings. Further east, we can occasionally see buildings breaking through the canopy where the trees are thinner, the last vestiges of Spitalfields and Whitechapel, street patterns acting like geology and defining the species of trees that prefer different soil.

The architectural beauty and intellectual depth of London Overgrown further reveal John Foxx to be a skilled composer with a critical grasp of harmonics and texture. His understanding and familiarity with the instruments at his disposal enables the machines to be as much a part of the compositional process as the artist at the controls.

As J.S. Bach himself famously said:

It’s easy to play any musical instrument: all you have to do is touch the right key at the right time and the instrument will play itself.

But exactly why the piece is named as it is remains hidden too among the leaves and lichen. It is a true Foxxian illusion, and typical of the way in which many of his compositions (narratives, artwork and music) merge with one another, at times become indistinguishable. “Oceanic II” bears a similar compositional structure to “Oceanic” and serves as an introduction to the album that follows in the same way. It may be fundamentally the same piece slowed down, treated and disguised (audiophiles would recognise this more ably than I can) – but no more so than Foxx has done many other times. Usually these artefacts take on their own identity and have different names.

Whether both pieces were written and recorded at the same time is another mystery, but largely an irrelevance. Each could be older than most of the trees that now grow down Archway Road, or even the buildings that once served as recording studios in the verdant and labyrinthine Soho. They set a scene, and we can trace their roots back to the ancient Holy Well under Shoreditch where two men found a trickle of electricity running down the wall and plugged in a dusty suitcase full of echoes…